We are very glad to announce that, we added new two beautiful models of aranmula mirror – Valkannadi’s in to the aranmula kannadi online showroom.

These two new models are the bigger versions of the most popular aranmula valkannadi model AMS1007.  The first one AMS1014 and second one is AMS1015. They are both in oval shaped mirror part with a beautiful and artistic handle. vaalkannadis are the traditional model of aranmula kannadi. These big vaalkannadis are comes with a hook on their backside, so that you can hang them in the wall.

Here is the photos of new vaalkannadi models.

Aranmula Kannadi or arammula kannadi ? – The first one – ARANMULA KANNADI  is correct, because it spells like Aranmula, means six bamboos.

there is a history behind this name – It belives that Lord parthasarthy came to the place by the Pampa river in a boat which is made up of six bamboos. Aaru means six in Malayalam Language, Mula means Bamboo in Malayalam. So aranmula means six bamboos.

So Hope that there wont be anymore confusion in how to pronounce the name Aranmula. Many people pronounce it like Aranmula, aaranmula, aarammula, arinmula etc..

The Aranmula mirror is unique. Unlike your ordinary mirror which is made of glass with a coating of silver nitrate, this one is crafted purely from metals — a special alloy of copper, tin, silver and some secret ingredients. The exact composition of these metals is known only to the few families in, of course, Aranmula, a village in Kerala’s Pathanamthitta district. While a regular mirror reflects images from its coated layer, the highly polished Aranmula does so directly from its surface. No distortions in the images, claim the makers who are extremely skilled artisans.

The mirror enjoys limited fame. The British museum is said to have a 45-cm long Aranmula and well-to-do Keralites keep one for its snob value (it is expensive) and for its supposed ability to shower good fortune on the owners. Even in these competitive times, the producers, a handful of families who have been making this mirror for generations since the 18th century, appear to doing well, but are clearly dependent on exports to keep their skills alive. They have become more sophisticated with their marketing and have set up a couple of websites to reach out to a wider market. All the same, it was a bit of a surprise to see the Aranmula, faintly remembered as a lost family heirloom, leap out of a list of over 60 products that have entered the Geographical Indications (GIs) registry in India.

GIs are in a way a kind of intellectual property right (IPR) instituted by the WTO that does more than provide trademark protection, allowing producers to get market recognition and often a premium price. It is an IPR that is not so much about the what but the where of a product although quality and authenticity are very much a concern. The major difference between a patent and GI is that while the former protects contemporary innovation, GI rewards the past and helps to preserve cultural traditions by protecting community knowledge. In essence, GI identifies a product as originating from a particular place, and whose quality, reputation or other characteristics are attributable to its geographical source.

In recent months there has been practically a stampede for GI registration in India. Unlike the developed countries which use it primarily for food products (Champagne, of course, and things like Parma Ham), India has extended GI protection to products across the spectrum, from handicrafts to flowers and spices. Thus the Aranmula mirror, along with assorted silks, saris, textiles and embroidery styles, joins soaps, incense, different varieties of jasmines, several strains of rice, tea, betel leaf, pepper and chillies to get the GI tag.

The GI Registry at Chennai, where right-holders can register their products, is getting inundated. The question, however, is how much of a protection a GI offers. For one, other WTO members are not obliged to ensure the same kind of protection to all Indian GIs because there is a problem of hierarchy. Although TRIPS has a single definition for all GIs, it has authorised a two-level system of protection: one, a general protection under Article 22, and the other, a higher level under Article 23 that is applicable only to wines and spirits.

According to some experts, Article 22 is not good enough. It is simply a law against unfair trade practices and for consumer protection and is not really for IPR protection. A producer not belonging to a specific geographical region could still use the GI as long as the product’s true origin is indicated on the label. In other words, an Aranmula mirror could be turned out from, say, Houston in Texas, thus allowing an American producer to free ride on the reputation and market goodwill created by Keralite artisans over two centuries. Tellicherry pepper and Udupi jasmine thus far are not in the same class as wine from Champagne.

As with several other issues, GI is a bitterly contested IPR issue in the WTO with Europe and parts of the developing world ranged against the likes of Australia and the US, a kind of old world versus the new world confrontation. It is unlikely that those fighting for extension of Article 23 protection will have it easy. But before it prepares to take on this global battle India needs to have in mind, if not in hand yet, some strategies on marketing and promoting its GI. These products for the most part are unknown and their commercial potential neither researched nor analysed.

And perhaps, the GI Registry in Chennai needs to apply more stringent yardsticks. As states get more competitive to include as many of their products in the registry, it appears have become a free-for-all. Does a Coimbatore wet grinder, the ubiquitous stone contraption used in south India to grind grains, qualify for GI?

Many people visiting Aranmula, and  write about their experience there. We found a blog, http://sankriti.blogspot.com/ and here is the write up about Aranmula Kannadi in his own words. ( Info and photo courtesy: http://sankriti.blogspot.com/ )
Aranmula is also famous for its traditional metallic mirrors known as Aranmula Kannadi. It is made of copper tin alloy and the ratio is a closely guarded secret.This is a unique art & handed down from generation to generation. Presently only five families are involved in this art in Aranmula and these families hold a patent. We visited one such family and studied the process of manufacture of this unique and beautiful mirror. See pics below: 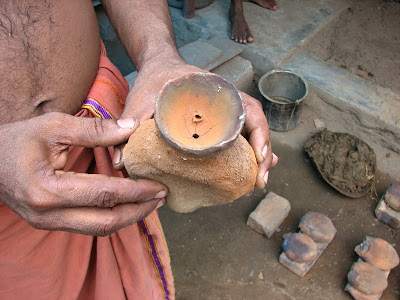 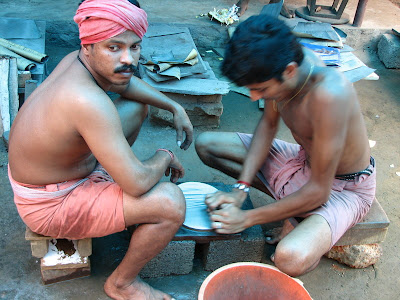 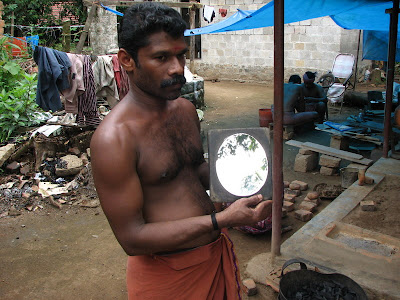 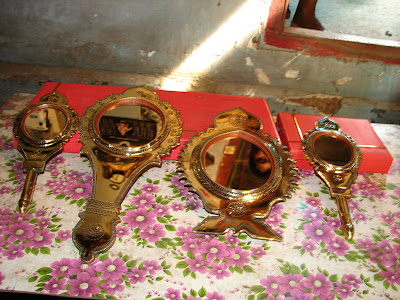 Business owners are also using it in their shops to attract more money in to their business. it also keep away evil eyes in business also.

For the purpose of keeping the evil eyes away, the aranmula mirror models with ROUND MIRRORS are using. It is very powerful to protect you from all kind of evil spirits and powers which can harm both of you personally and in your business or profession.

So next time, when you need to keep away the bad effects of evil eyes in your business or in your personal and family life, Get an Aranmula kannadi. and welcome goodness wealth and prosperity in to your life.

As per local belief the handmade Aranmula Kannadi is considered as an auspicious object kept in households for bringing prosperity, luck and wealth. As per tradition in Kerala, Aranmula metal mirror forms part of the ashtamangalya set – one of the eight auspicious items that is usually arranged and displayed at functions like marriage. The proper maintenance of the metal mirror, requires the mirror to be kept under room temperature and also away from heat and dust. There is a prescribed method to wipe the mirror to remove finger stains and other marks on it. The wiping movement is restricted to a particular direction and not in all.

The origins of the Aranmula Kannadi are linked to the Aranmula Parthasarathy Temple. The legend says that some centuries ago, eight families of experts in temple arts and craft were brought to Aranmula from Thirunelveli in Tamil Nadu. They were given the task of undertaking works in the Parthasarathy Temple. While working with bronze to make a crown for the presiding deity of the temple – Lord Parthasarathy, they accidentally stumbled upon a unique reflective property of one alloy comprising copper and tin. The craftsmen later tried different compositions, which eventually led to the standards of making the metal mirror, which are still kept as a guarded secret.

Many people asking the same question – Why aranmula kannadi is this much costly? since we are getting much bigger ordinary mirrors for this cost?

Many people claims that they can give very cheap aranmula kannadi. NEVER EVER BELIVE TAHT! Nobody in this earth can sell an original and traditional aranmula kannadi in cheap price. if somebody is giving it like that, it would be a FAKE ARANMULA KANNADI. check out the quality of mirror some times they give you ordinary glass mirror in the artistic frame.

There is  one place you can get 100% genuine traditional and original Aranmula kannadi. for reach there Click Here

Aranmulakannadi.org is an authenticate website for providing everything about world famous Aranmula Kannadi. Aranmula Kannadi is unique metal mirror from kerala. where the metal mirror-making tradition survives ( 14th century ) at the village of Aranmula, Kerala, India. Here, a cast high-tin bronze mirror of 33% tin with highly polished surface or reflective properties is made which is comparable to, if not much better than, modern mercury glass-coated mirrors. Aranmula Kannadi is very traditional beautiful and precious. It is believed that having an Aranmula Kannadi will bring luck and prosperity in to the life.