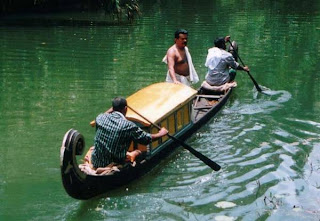 The famous Thiruvonathoni of Aranmula Temple is sets for sail of this Onam season.
Keeping alive one of the age-old temple traditions closely linked to the legend of Mahabali, Narayana Bhattathiri of Kattoor Illam at Kumaranallor near here, has set sail on his country boat carrying provisions, for the land of his ancestors who had the privilege of providing the Onasadya (Onam feast) to the deity at the Sri Parthasarathy Temple at Aranmula.

Traditionally it is the eldest male from Kattoor Illam privileged to take the provisions for the ceremonial Onasadya at the temple. As the senior most member of the family.The day began with the special prayers before the deity at the Kumaranallor temple. By 11.45 a.m. he was ready for the journey.

According to legend, the ancestors of Mr. Bhattathiri were ordained to carry the provisions of Onasadya, by the deity at the Aranmula temple. However, generations later, Mr. Bhattathiriâ€™s ancestors migrated from Kattoor to Kumaranallor, but the tradition continued.

Accompanied by representatives of 18 families who offer provisions for the Onam feast at the Aranmula temple, he will change his boat and set sail on the â€˜Thiruvonathoniâ€™ on the last leg of his voyage immediately after the deeparadhana at the Sri Mahavishnu Temple at Kattoor on Tuesday, Uthradom day.

He will take the same route for his return journey and reach home on the same Churulan Vallom on which he had set out.