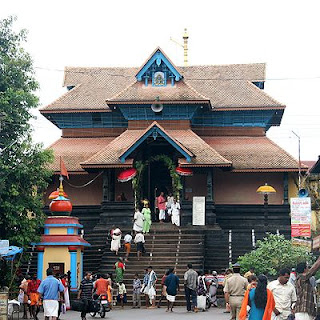 It is one of the 108 temples and one among the celestial abodes of Lord Vishnu revered by the tamil poets called Alwars(1stmillenium century bc)in their hymns.

Aranmula Parthasaradhi Temple is a major temple in Kerala. The Main idol of worship is Parthasaarathy(Krishna),who was the leader of Arjuna (the pandava prince)in Kurukshetra War. It is said that Arjuna built this temple at Nilackal near Sabarimalai to expiate for the sin of having killed Karna on the battlefield which was against the dharma of killing an unarmed enemy.The idol was brought to Aranmula in a raft made of six pieces of bamboo and
hence the name Aranmula (six pieces of bamboo). It is also believed that Lord Vishnu revealed
the knowledge of creation to Lord Brahma at this place.

The temple is on the left bank of the Pampa River.The temple has four towers over its entrances on its outer wall.The eastern tower is accessed through a flight of 18 steps.The 57 steps from the northern tower leads to river Pampa. The temple is noted for its architecture (vasthu) and fine mural paintings which dates to the 18th century.

The temple is on the left bank of the Pampa River.The sacred jewels (Thiruvaabharanam)of Lord Ayyappa is taken from Aranmula Temple ,in procession to Sabarimalai during the festival season every year.The temple is also known for the watersports (Aranmula vallam kali/boat race)involving a spectacular procession of snake boats.

The Aranmula mirror is also much related to the history of the temple.