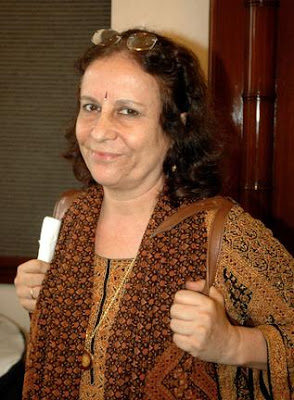 Kathakali artiste and teacher Louba Schild, founder of Vijnana Kalavedi, bids adieu to her adopted land where she lived as a Malayali for 40 years. Her life in Aranmula was dedicated to promoting and preserving the art and culture of the land she adopted as her own.

There is very little of the French in her except for her name and accented English. Louba Schild is otherwise traditionally Malayali, in attire and attitude. Not surprising. For Louba has been in Kerala for 40 years now. Her life in Aranmula was dedicated to promoting and preserving the art and culture of the land she adopted as her own. Through Vijnana Kalavedi, which she established in 1977, Louba has been conserving the praxis of a rich heritage. She has passed on the baton to a large number of people from around the world who have been part of this enriching Vijnana Kalavedi experience.

Louba has now, quite surprisingly, decided to bring down the curtain on this cultural enterprise. Vijnana Kalavedi will be formally closed down by the end of this month. They had their final performance the other day at what looked a rather desolate venue. And in a few monthsâ€™ time, Louba will be on her flight back home to Paris along with her 94-year-old mother, Nadia Schild Chipiloff.

â€œDonâ€™t ask me why Iâ€™m doing this. It is a personal decision,â€ Louba tells you even before you try asking her this question. Prod her further and you realise that there is no rancour or ill-feeling, but it certainly appears to go beyond just â€˜personal.â€™

Louba was drawn to Keralaâ€™s rich culture, pulsating art and heritage. She studied Kathakali from great masters like Kalamandalam Krishnan Nair, never missed a chance to perform, and dabbled in other classical and traditional arts. Through her institution she tried to pass on what she experienced to others who came from other lands. But somewhere down the line she realised the futility of all this.

â€œI think my biggest regret has been learning Kathakali. I should have remained a dedicated spectator rather than a practitioner. This art, like Indian culture, is so deep-rooted that anyone like me would be able to touch only the periphery. Even after all these years of learning and performing I have realised that it is still incomplete. There are certain things, simple though it might seem, that cannot be expressed by a person who is alien to this culture, this ethos. All these years I have been doing this, teaching, learning. I should have left it alone,â€ feels Louba.

One thought on “Louba Schild,bids adieu to her adopted land – Aranmula”