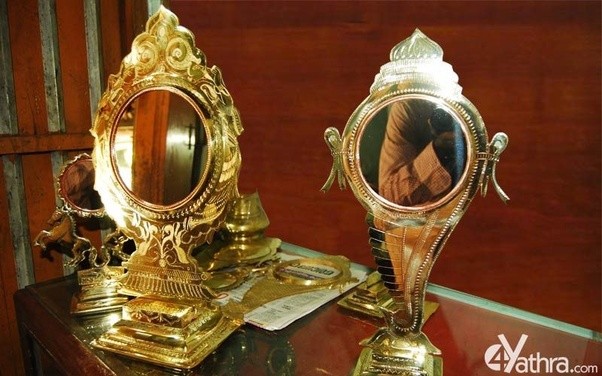 Aranmula – This small village is worldfamous for its metal mirrors with no refraction, the ‘Aranmula Kannadi’ ( kannadi means mirror in Malayalam). The technology for this is not used anywhere else in the world.Â Since theÂ spectacular snakeboat races starting from midSeptember that is a particularly good time to visit Aranmula.

Those of you who are artistically inclined should check out the fine 18th century murals in Parthasarathi temple, dedicated to Lord Krishna, on the banks of the river Pampa.

About 42 snake boats are expected to participate this year, representing 42 different ‘karas’ of Aranmula.

More than a half of dozen channels will broadcast the Aranmula snake boat race 2010 live on television.Around 3 lakh spectators including visitors from other countries have always been attending this event.

Which is the best district in Kerala to live (based on education, hygiene, entertainment, communication, healthcare, transportation, home amenities and kitchen facilities)? Thiruvanathapuram, Kochi, Kozhikodeâ€¦surprise, surprise â€“ it is Pathanamthitta. As per the latest survey by National Sample Survey Organisation (NSSO), this hilly district is the best one in Kerala. The money power of Thiruvalla and the culture of Aranmula have been put to good use, it seems.

As per local belief the handmade Aranmula Kannadi is considered as an auspicious object kept in households for bringing prosperity, luck and wealth. As per tradition in Kerala, Aranmula metal mirror forms part of the ashtamangalya set â€“ one of the eight auspicious items that is usually arranged and displayed at functions like marriage. The proper maintenance of the metal mirror, requires the mirror to be kept under room temperature and also away from heat and dust. There is a prescribed method to wipe the mirror to remove finger stains and other marks on it. The wiping movement is restricted to a particular direction and not in all.

The origins of the Aranmula Kannadi are linked to the Aranmula Parthasarathy Temple. The legend says that some centuries ago, eight families of experts in temple arts and craft were brought to Aranmula from Thirunelveli in Tamil Nadu. They were given the task of undertaking works in the Parthasarathy Temple. While working with bronze to make a crown for the presiding deity of the temple â€“ Lord Parthasarathy, they accidentally stumbled upon a unique reflective property of one alloy comprising copper and tin. The craftsmen later tried different compositions, which eventually led to the standards of making the metal mirror, which are still kept as a guarded secret.

It is a dream for everyone in Aranmula village, as well as the entire central travancore.Â  If things go by as scheduled, the State will have another state-of-the-art international airport in the next five years.

The company promoted by NORKA, a consortium of non-resident Keralites, and Mount Zion Trust has already appointed KITCO as a consultant for developing the private International airport at Aranmula.

The company had acquired about 500 acres of land at Aranmula in Pathanamthitta district for developing the airport.

The proposed aranmula airport is situated very near to Aranmula parthasarthi temple and pampa river, where the traditional aranmula kannadi is being made. arrival of airport will boost the tourism in this place, and hence the traditional arts and crafts forms like Aranmula metal mirror, and vasthuvidya will get promoted in to a more wider aspect.